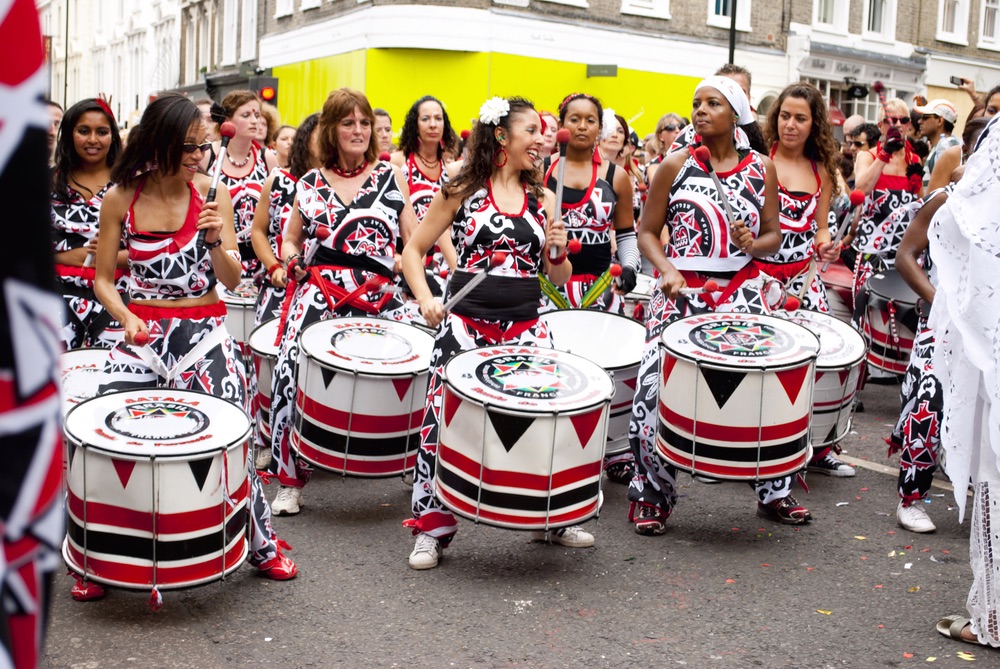 Notting Hill is a trendy and relatively wealthy area, but current worldwide awareness of this small part of London is almost entirely due to the glossy 1999 movie of the same name, starring Julia Roberts and Hugh Grant.  This extremely popular and award-winning romantic comedy forever positioned the Notting hill area as the epitome of understated London chic but, much to the horror of Notting Hill natives, the subsequent influx of people hoping for a little Notting Hill magic in their own lives pushed rents and property prices to astronomical levels.  The Notting Hill movie‘s script writer, Richard Curtis, lived there with his wife but they sold up and moved elsewhere once prices shot up.

Among Londoners, the area was already famous for the annual Notting Hill Carnival, a colourful and infectious celebration of the West Indian roots of many to the areas residents, mostly from Trinidad and Tobago. The two-day August event draws over one million visitors to the area and is considered to be highly positive for the local economy.

The lively and cheerful atmosphere is only slightly marred by  violence and some Londoners do question the six million pound police operation required to avoid the tragedies of previous Notting Hill carnivals, including five murders and several riots.  The 2011 Notting Hill carnival resulted in only 245 arrests and 83 hospitalisations but the carnival is generally considered to be safe for tourists as most of the trouble is black-on-black violence.  As we advise when you are in any part of London or attending any London event, behave sensibly, don’t carry valuables and remain aware of your surroundings.

During the rest of the year, one of the best reasons to visit Notting Hill is the Portobello Road Market, which sells all sorts of products but is most famed as the one of the biggest antique markets in the world and, certainly, the biggest in the United Kingdom.  You will find the most stalls open during the weekend, particularly on Saturday mornings, but there are traders to be found manning their stalls throughout the week. Portobello Road Market is considered to be an excellent place to find interesting second-hand clothes and, with the market stretching for almost one kilometre, you’ll have plenty of stalls to rummage through.

Portobello Road itself is very long, running from the north right to the south of Notting Hill and, unlike most British high streets, has managed to preserve its individual charm, energy and sense of identity, with an eclectic mix of cafes, restaurants and pubs.  Plenty of smalls, intriguing shops inhabit Portobello Road, including many antique stores and “vintage” clothing boutiques, energised by their proximity to the market.

Not usually thought of as a place to go clubbing, Notting Hill nonetheless has two clubs worth checking out if you happen to find yourself on Notting Hill Gate at a suitably late hour:

The Notting Hill Arts Club, 21 Notting Hill Gate, is considered highly hip, with different genres of music featured on different nights.  Mostly DJs but you can occasionally stumble across some live music here.

Although it may cause the locals to roll their eyes, you might enjoy seeking out some Notting Hill movie locations.  The blue door of Hugh Grant’s house in the movie Notting Hill is a popular tourist attraction, although it is not actually the original door, that was auctioned off for charity! Many also seek out The Travel Bookshop upon which his character’s “Travel Book Company” was based, you’ll find it around the corner from Portobello Road, on Blenheim Crescent.

Another famous and, in my humble opinion, far better movie shot in Notting Hill is the 1987 cult classic Withnail & I.  Now, funnily enough, that movie’s London scenes were supposed to be set in another trendy London area, Camden Town, but could not be shot there for logistical reasons.  So, true Withnail & I fans must wander about the streets of Notting Hill in order to capture some whiff of that movie’s unique atmosphere.  Sadly, the pub in which Withnail famously barked his order for large gins and cider has long since been demolished.

If you are a fan of the Beatles, it is worth knowing that the chase sequence in their movie, A Hard Day’s Night, was shot here, with Ringo being pursued by hysterical teenage fans around many Notting Hill landmarks that are recognisable to this day

Somewhat trendier musical historians may be more interested in The Bramley Arms pub on Freston Road, where Spider, a Mod character in the cult movie Quadrophenia, is attacked by a gang of Rockers.  The Bramley Arms’ highly distinctive architecture also featured in another cult classic, Sid and Nancy, starring Gary Oldman and the tragically doomed punk star Sid Vicious, and the classic Ealing comedy, The Lavender Hill Mob, starring Alec Guinness.