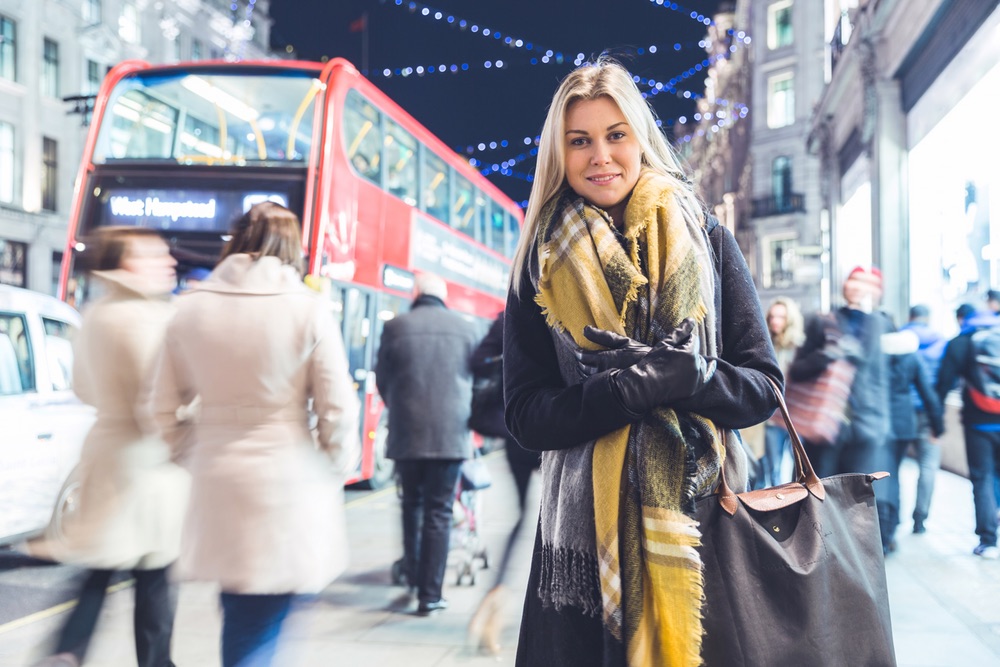 Although geographically CharingCross is the centre of London, for Londoners Oxford Circus is considered as central as it gets. The street that never sleeps is always buzzing with commuters and shoppers alike. Oxford Street links into some famous areas, including Soho, Mayfair, Carnaby Street and Marble Arch.

A short walk from the prestigious Park Lane, Oxford Street is a shopper’s dream with just about every store you can think of within walking distance.

At the top of Oxford Street is Tottenham Court Road, famous for high-end electrical goods at bargain prices.

Oxford Street is convenient to get to and served by some Tube stations within walking distance, the nearest being Oxford Circus.

Once you are bored of shopping and fancy some space away from the hustle and bustle, hop on a short bus ride down to Hyde Park and enjoy Central London’s biggest green space. Alternatively, see a show at one of the many surrounding West End theatres.

London’s Oxford Street is one of the most famous streets in the world. World Famous for it’s amazing shopping. If you decide to have a shopping trip to London’s Oxford Street, it might not be a bad idea to prepare yourself mentally first because this is no quaint little English road, this is not some tweedy offshoot of university city Oxford, this is Europe’s busiest shopping street and the crowds are so bustling that, just a few years back, there was serious discussion about splitting the pavement into fast and slow lanes!

So, strap on your best Gucci armor, because this is not retail therapy, this is retail WAR!!
Among the over 300 shop-fronts that line this famous thoroughfare, you will find the flagship stores for all of the major names in British retail. They pay some of the highest rents in the world to be there and are rewarded with some of the most profitable foot traffic in the world. Among the biggest names that loom over Oxford Street are House of Fraser, Selfridges, Debenhams, TopShop, New Look, John Lewis and Marks & Spencer.

Your introduction to Oxford Street will most likely be via one of the four tube stations (London’s subway system) that run along it, West to East: Marble Arch, Bond Street, Oxford Circus and Tottenham Court Road. Almost all the London tube lines stop at least one of the Oxford Street stations.

If you feel up to it, perhaps the best way to dive right into the Oxford Street experience would arrive at Oxford Circus – probably the busiest tube station in the entire system, it feels like a circus or madhouse should you arrive at a busy time. Oxford Circus is not hard to find, as two of London’s main tube lines converge there: the Central Line and the Northern Line. As you join the throng of passengers disgorging from your tube train, be careful to follow the exit signs rather than the crowd because many of your fellow passengers will be simply changing lines.

As you follow the exit signs, you will find yourself walking down long tiled passageways that you may recognize from movies such as “An American Werewolf in London”. You will also find yourself riding up endless escalators. If you want to stand on the escalator rather than walk up it, be sure to stand to the left so that you are not blocking busy Londoners who want to get by – being shoved aside by a muttering cockney would be an unfortunate start to your Oxford Street experience.

For a more sedate arrival, I would suggest arriving, instead, via the Marble Arch tube station, which is at the less busy Western end of Oxford Street. You could also arrive in at the Eastern End, via the Tottenham Court Road station but that is a lot more bustling and, personally, I prefer to end my Oxford Street Ramble at the Eastern end, so that I can continue to London’s Theatreland and Soho districts.

Whichever tube station you choose, you will emerge, blinking, into the daylight and one of the most hectic streets you have ever seen. Join the flow of pedestrians and take it all in. As with any major city, beware of pickpockets and bag snatchers.

Leave your valuables at home and keep your money close to your body preferably to the front. In the UK, it is acceptable to use a card to pay for even minor purchases, such as a coffee or tube tickets, so, you don’t even really need to carry money and, should a situation arise in which you do need money, you will find ATM cash machines everywhere.

There are frequent cafes and sandwich bars at which you can pull into and have a rest if it all gets a bit much but, of course, these are pretty crowded too, and you may have to queue – of course, queuing itself is a quintessential part of the British experience! As you progress along Oxford Street, it is a good idea to keep your eyes open for tube station signs.

Entries to the four tube stations appear at both sides of the street and can be very helpful in letting you know where you are. Just remember that the Oxford Circus station is right in the middle of Oxford Street, right at the intersection with Regent Street, another big, famous and highly fashionable shopping street that you should take the opportunity to experience.

On occasion, you may see an interesting store on the opposite side of Oxford Street but getting across the road can be tricky, especially when there is a barrier between the road and pavement. If you happen to be near a tube entrance, pop down and use it as a handy underpass to get to the other side.

You may be tempted to use the tube stations to skip along Oxford Street but, unless it is raining heavily, that is not really a short cut – it takes so long actually to get down to the trains and, then, back up again, you are better off walking, the tube stations are not actually all that far apart, the entire length of Oxford Street is only about one and a half miles.

It might be a better idea to hop onto one of the many red London double-decker buses that traverse Oxford Street, particularly if you have a travel pass that includes the use of buses. Sitting on the top deck of a bus allows you to gaze down at the uniquely London pedestrian madness below.

Oxford Street is worth experiencing but, on the whole, it may make more sense to do your shopping in a less busy location. Almost all the stores will have stores carrying exactly the same merchandise in hundreds of other locations. There are some unique sights, such as Selfridges famous food hall but, on the whole, you should probably avoid having to struggle along Oxford Street with large shopping bags or an armful of bulky packages.